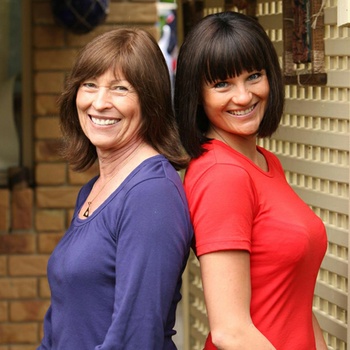 Like the elephant in the room, alopecia is a subject people tend not to talk about.

Doctors have little knowledge of the reason for the loss of hair and no cure has been found, as Sunshine Coast sufferers Ivonna Mroz and Pat Law have know full well. Underneath the wigs and cosmetically tattooed eyeliner and eyebrows, both women are bald.

No, they are not dying.

They are as healthy as the next person, though quite often they are mistaken as having cancer - an honest mistake, but one which negatively affects anyone with alopecia (pronounced al-oh-peeshia).

“If we go out in a scarf, you feel like such a fraud because we're not sick,” Pat said.

Ivonna said that without eyelashes or eyebrows, she had no colour on her face, which made her look sick and pale.

“We don't want people to feel sorry for us,” she said. “We just want to go out and be able to enjoy the day without worrying about our hair falling off, or just be able to go for a swim without losing our hair.”

Ivonna, 29, suddenly developed alopecia at age four, after her family moved to Australia from Poland.

“It wasn't until I was in Grade 4 or 5 that it got really horrible,” she said. “Kids would single you out because you were different - I really feel for any kids that are different at school.”

As a result, Ivonna was subjected to bullying as a child.

“Kids would hide your wig when you go swimming or just pull it off,” she said.

“They would just give me a hard time about it and I never really did much sticking up for myself.”

Around the house, Ivonna wears a scarf but she is still trying to be comfortable with wearing it in public.

“I've just started wearing my scarf to the beach, too, now,” she said. “Before, I was like, 'No, I don't want to do that' because I didn't want to attract any unwanted attention, so I was always wearing my wig.

“But then, I could never go swimming. So I thought, 'No, stuff it. I'll wear my scarf and if people look, they look'.”

Even though her acceptance of the condition has taken nearly 20 years, Ivonna has bad days.

“I still have days where I get frustrated because it feels like such an effort to get up in the morning,” she said. “It would be great to have it back, but I'm not struggling with it anymore, like I used to. It is a part of me now.”

Pat, 59, started losing clumps of hair at 38. After about nine months, she had lost almost all her locks.

“You don't realise, until it happens, how much your idea of yourself is all wrapped up in your image,” she said.

As a mother of two, she also watched her family go through her suffering.

“I always had to cover it up and pretend I was OK with it,” she said. “I remember once, when I was in the bathroom and looking at myself in the mirror, I thought, 'What a freak? What is going on here?'”

In her mid-40s, in what she thought was a miracle, Pat's hair started growing back. But after a couple of years, she lost it again. “The second time around, I had the internet and that was such a life-saver for me,” she said.

“When it started falling out again, I thought. 'I cannot go through this again'.

“People would give me funny looks and I didn't have it in me to tell them what was happening.

“I found that when I did, they would come up with all this crazy advice and it got a bit disheartening.”

At times, she said she had felt unattractive and “weird looking”, but talking about the condition and having the support of her family has helped Pat accept a life with alopecia.

“When I first lost my hair, I scared myself, so I can understand why people get a bit freaked out when they see a bald woman,” she said. “I do miss my eyelashes. More than anything, that makes you feel bald, but it's a part of me now.

“Talking to others on the internet has been a big saviour for me to realise I'm not alone.

“People just need to break the silence, because it can be quite an isolating thing.”

Ivonna said sufferers needed to work around the obstacles of alopecia, or regret it.

“I just grew up and realised there is more to life,” she said. “People shouldn't stop their life because of it. I've missed out on a lot of things because of alopecia. Just look at the bright side of it and that's how you overcome it.”

Ivonna and Pat are not the only ones who suffer this mystery condition and encourage any sufferers to talk about their condition, rather than hide it.