So after a lengthy delay, I got my hair buzzed last night. The non-bald portions had gotten way too long, so my fro was full of "dents". {Yes, it was kind of hilarious to see.} I asked her to take it as low as possible fully aware that I had the bald spots. I assured her it was okay. She really didn't want to do it until I told her I had a wig on standby. I also told her that I'm eventually going to shave it all anyway because the bald part isn't growing back. She asked why ... I told her alopecia ... she said what is that {my eyebrows raised in disbelief} ... I said an auto-immune disorder, but before I could elaborate, the phone rang. Opportunity missed. I just find it strange that a beautician/barber does not know what alopecia is.

Anywho ... here's the wig I had on standby. I'm taking her for a spin today at the office. Saturday schedule is only 5 hours, so I'm trying to see if I can last that long. Had it on since 11:00am. Right now it's 1:18pm. So far so good. It's a bit snug. Not a "give you a headache" snug, but a "too tight to really forget it's there" type of snug. And the room I'm in is hovering around 72/73 deg, so I'm not going to have to worry about getting hot.

Her name is Tina, from the Junee Manhattan Style collection. A bargain at $22.99 from a BSS in the 'hood. :)

Comment by Anne Williams on February 19, 2011 at 9:22pm
Totally cute Angie! I tried on my first wigs today and will make a decision soon as to what I want to buy and whether or not to buzz my remaining hair.

I can't believe your beautician didn't know what alopecia was! Mine was the one that diagnosed my aa after my first bald spot showed up!

nice wig - glad to hear you were brave enough to try it at work. I have a closet full of wigs and I haveto say the wigs are HOT!!

It went okay. It was bearable, but by no means something I would want to do everyday. The snug/grippy feeling was just irritating, and I never found a really comfortable way to position my glasses. The ear tabs on the wig were interfering with my glasses going over my ears properly. By 3:30 or so it was sort of painful, so I shifted it around a bit and it got better.

I had to stop at the market after work, so I actually didn't take it off until about 8:00 that evening. Then it took quite a while for the indentation from the wig cap to fade. It led me to wonder if tight wig caps affect scalp circulation to any degree.

While I don't believe I will become a regular wig-wearer, I will continue to experiment. After all, it is kind of fun to change up the look from time to time. I can totally see a BSS wig addiction developing the same way my makeup addiction has developed. {D@mn Sephora!!!}

Comment by Lili Añel (aka Eulalia) on February 20, 2011 at 11:47pm
Angie you look great in your wig. I will be cutting my hair down/buzzed for the same reason you did, can no longer hide spots. I ordered two wigs that I should get in the next couple of days, just to see if I lie how they feel. Got two different types. I suppose I will post how it works out. Such a big step. Thank you for sharing your experience. I have a BIG head; I had to get large size wigs and wonder if they'll be tight. Not something I want to feel. Ultimately I will get a custom wig when I have the money. You look great, wig or not-thanks for sharing.

Comment by Angie on February 22, 2011 at 10:50pm
Alright now! watch yourself cutie! lol It look very nice on you. short and sassy. I love short hair. 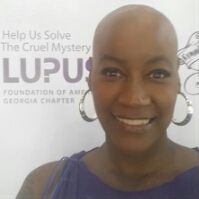