"Meet the inspiring woman embracing her alopecia, even on her wedding day"

I recently came across an article about Kylie Bamberger, a member of Alopecia World. Below are some excerpts I would like to share: 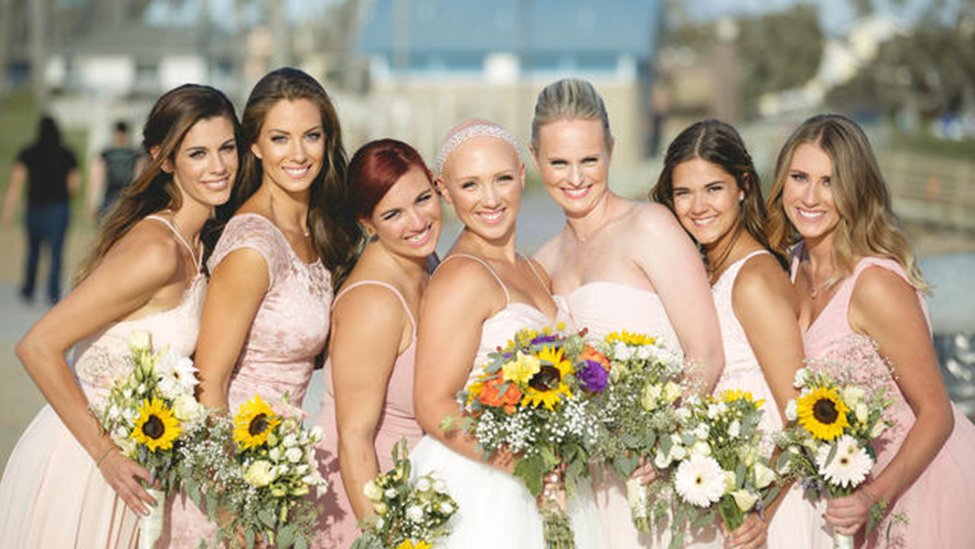 “Kylie Bamberger looks every bit the blushing bride in her wedding photos. She’s wearing a white ball gown, clutching a bouquet of sunflowers and gerbera daisies, flanked by beaming bridesmaids. But there’s one major thing that sets her apart from typical brides: Bamberger is totally bald.”

“Bamberger, 27, has alopecia universalis, an autoimmune disease that attacks hair follicles and causes total hair loss all over the body, including the head, eyelashes, eyebrows, and all body hair. She hasn’t worn a wig or covered up her head for more than five years.”

“The transition from bewigged to bald at times dampened Bamberger's spirits, and often left her frustrated. She felt self-conscious about her appearance, especially when people would stare and ask uncomfortable questions. To her horror, sometimes she was mistaken for a man in the women's restroom, and on more than one occasion, she was called a skinhead.”

“The turning point in Bamberger's evolution came during collegiate soccer season. Her teammates were out to win games, not to gossip about someone’s hair (or lack thereof). On the field, she developed mental toughness, and discovered her personal power pose: "resting bitch face," as she calls it. Her icy stare intimidated players on opposing teams—and in everyday life, silenced rude whispers about her baldness. “If people were staring, I would stare back," she says. "If you’re going to go out bald, you have to have the confidence to own it. You’re not offending anyone.””

“The stares and uncomfortable questions still happen, but Bamberger says she also receives compliments and, sometimes, even hugs. She’s come to appreciate the attention she gets while walking her bald.”

“Ultimately, she hopes being bald can become as accepted as trends like unicorn hair are now. First, though, must come more acceptance, which she hopes she can have a hand in fostering. “Hair loss doesn’t make you unhealthy, and it doesn’t make you ugly,” she says. “Those are two massive, massive misconceptions. I am not sick. I’m only stronger. If you’re out there, bald, it just means you’re becoming stronger. If you’re out there embracing your bald, you’re stronger. Period.”

You can read the full article here.