This is tragic, but I think it is important that we all share this story.  What can we do individually or as a community to help our brothers and sisters? 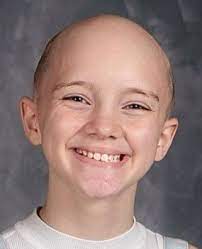 “She had alopecia, which is an autoimmune disease that made her body attack her hair follicles and made her hair fall out...She started this school year with a wig, a beautiful wig. Within the first few weeks, kids were ripping it off of her head. In front of the whole class...Would smack her upside the head in the hallway,” Ball said.

Ball said she addressed the bullying with a social worker and counselor.“And I asked them specifically   ‘please get in touch with the parents’. I don’t know if that happened. There was no follow up and three weeks later here we are,” Ball said."

“Her death is not going to be in vain. Change is going to come from this,” said Ball.  Ball said she believes the school failed Rio.

“They failed her. They failed us. They continue to fail other students because Rio is not the only one. I know that” she said."

That is so sad. I’m going to be 70 in a few months, and my ONLY problem is my eyebrows. Let me say that I find myself looking at people with good eyebrows, and feeling bad about mine A LOT. Don’t get me wrong, I understand that this is nothing compared to what a lot of other people are going through. My only point is that, if this is bad for me, it is many times over worse for a young person who is dealing with hair loss on his/her head. Kids are cruel when you have NOTHING wrong, but they will really go for any flaws, no matter how small, but especially how big.

I’m not sure there’s any way to change that, but having a support group is incredibly important. People need to know they aren’t alone, and this is not the end of the world.

This is horrible. I was bullied mercilessly when I was a child. I didn't have Alopecia at the time, so  can only imagine how much worse it would have been if I had it at the time. I was told that nothing could be done about the bullying, because I must have done something to bring it on (my parents even said that), and it would violate the right to freedom of expression if they stopped those that were doing the bullying.

Alopecia hit me when I was in my 40s, and it was even hard then. Kids are not the only bullies out there. I was asked to leave the church I was attending, and I lost a business, all due to the business. I was at a pet expo and someone thought I had been separated from the special needs group that was there, and offered to help me find them. Currently, I have a hard time getting my new business up and running, because I keep running into people that choose to be ignorant.

I hope that something can come of this situation, but my fear is that nothing will change.

This is tragic, that poor girl shouldn't have had to deal with that. I know kids can be cruel but I am disgusted with these bullies. Shocked and horrified!

Such a sad story.  All people can be so mean and heartless. They start out as these awful school bullies, and continue through life doing much the same, in various ways.  They learn the bullying, and the name calling from their parents.  It is a vicious cycle.  I feel so badly for this little girl.  RIP sweetie, you will be bullied no more.

So sad. This hit me very hard, as I was this girl about 50 years ago. I lost my hair at 13 and at 14 was bullied in high school, and during a P.E. class one day, my bully pulled off my wig. I was crushed and just ran away crying. Thank God my sister was in my class and retrieved my wig and found me in the locker room and tried to get me changed out of P.E. Looking back, I don't know how I ever made it through that year, as I was a very shy damaged child. But for Grace, my life would have ended way too soon as this child's did. My heart hurts for her family and for all the children who have to endure the world's bullies.

This breaks my heart, more so because I can relate to this girls pain. Having alopecia universalis from the age of 5 and experiencing bullying all through school you learn to grow very tough skin. Kids are brutal. Adults are brutal too because of ignorance, lack of knowledge, curiosity, and just plain rudeness. I turned 46 this year and It is only in the last 5 years I have become comfortable enough in my skin to not care what people say, or think. I raise my daughter that we are all unique and different, fat, thin, tall, short, bald, etc. No one looks in a mirror and thinks they are perfect but we are perfect for those we connect with as friends, partners, and family. Regardless of sex, race, or blood. Share kindness. And if you can’t, keep your thoughts in your head to yourself. The fact this child felt all alone saddens me, but as a mother of a female 12 year old who opens her home to all of her daughters stray friends with family that do not see or listen to their kids, I understand. Listen people, watch. The signs for help are always there before it gets to this drastic ending.

Thank you for publishing this story on this forum, Cheryl.  I think we can start by stopping allowing people to tell us "It's only hair".  We also need to stop allowing insurance companies to refuse treatment whether it be wigs, medication, etc. by telling us it is "not medically necessary".  We have a REAL DISEASE--end of story, and we cannot allow others to minimize it.  I am sorry to say that I have even found a few members on Alopecia World who do that.  I don't know if it is an attempt to delude themselves, to make others accept them by behaving in a manner that gratifies the needs of other or what.  The school was told in this case about the bullying and did nothing.  They need to be held accountable, as do the parents of the bullies, and the bullies themselves.  No more, "Oh kids will be kids".  No more psycho babblers telling us that it's our fault if we "allow" someone else to make us feel bad about ourselves.  STOP THE EXCUSES NOW!!