I have been diagnosed with this, although I am still cautious I don't think the medical people know much!!, I also have hypothyroidism, does anyone think this is connected at all, as I lost my eyebrows first, then patches at the temples, then body hair, now my hair is going ... fast... I am on a high vitamin, protein diet, I have not seen any signs of my hair returning, can I expect it to grow back, I am having trouble coming to terms with this.

Thanks to this site I can talk about it…

My name is Devyn Napier and a few months ago I asked for some advice and guidance regarding my science fair topic because I was entering a science fair and I began hitting dead ends and felt very discouraged. My topic was concerning Alopecia Areata and I have been working for about 10 months on this project. My project involved manipulating the external environment of two proteins involved in this autoimmune disease (i.e. NKG2D and ULBP3). I predicted that by altering the…

Alopecia has now changed my life for the better - what about you?

Alopecia is one of the most emotionally devastating conditions, but it doesn't have to take over your daily life.

I have recently turned nineteen and I have now been suffering from Alopecia Areata/Totalis for five years. My first episode happened when I had appendicitis and although this was not the immediate cause it was one of the many contributing factors which caused the first bout of hair loss. At the time I was in the middle of exams at school which meant stress levels were…

“And once the storm is over, you won’t remember how you made it through, how you managed to survive. You won’t even be sure whether the storm is really over. But one thing is certain. When you come out of the storm, you won’t be the same person who walked in. That’s what this storm’s all about.” Haruki Murakami

"You've got to be willing to lose everything to gain yourself." Iyanla Vanzant

"The inward journey is about finding your own fullness, something…

I have just purchased my first human hair wig, and am getting ready to wash it in the next couple of days.  I am very scared of the care of it, but have researched what other people use to shampoo and condition.  Can anybody tell me if I need to be doing something else? I have heard people use oil, but I don't know how often you should do this? how do you know when it needs it,  and also if you use heat what thermal protector do you use?

A 9-year-old girl from Grand Junction, Colorado will be allowed to return to school after being banned for shaving her head.

This quote is a really amazing peice of wisdom

Hey guys! My top hair has grown back butttttt it's still really short. I don't have bangs, but I'm getting somewhere. I put my hair into a big bun on the top of my head so I don't pull out my hair on my crown. Mom still isn't fine with my trich. :(
She hates when I wear my wigs.

Alopecia won't be a secret in Hamilton anymore!

I love kids. They just take life as it is right in that moment. There is no regret about the past, or worry about the future. They just live for today. I have been without my wig on a permanent basis for about 3 months now and have been observing people’s reactions. Kids don’t even look, or if they do, they are looking at me, not my hairless head, then they carry on with whatever attracts them next. Adults tend to create a story around my head. They look, look away, come back again, and this…

Am thinking of buying a Freedom wig

I have had AU for many years and have worn scarves and also synthetic wigs. The Revlon wigs that I have loved and bought for a while, now seems to be less good quality - and reading this site I have got to think I would like to try a Freedom wig. I a sure there are many of you who can advise me. Does anyone not like them? Could they feel too tight or too hot ? What kind of weight do you suggest getting?

Would be glad to hear your thoughts and experiences

Hi all, first off, I am so glad to finally find a place that understands what "AA" is... other than someone asking me how long I have been sober... *weak attempt at humor" she says.... but anyhow, I am very new at this, diagnosed two months ago. Mine is fast moving, stage 3- 35-40% already and climbing. Currently, I was in stage 2 of steroid treatment and responding (i had some new fuzz on the new spots old ones... nah)... but got the word from my derm that "neither of my insurances will… 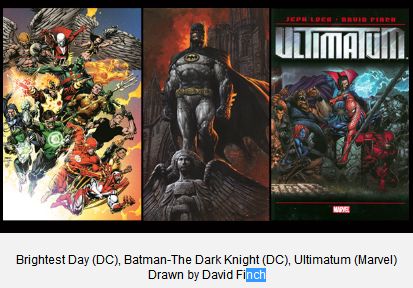 I recently read an article about David Finch, an alopecian super hero artist.  When asked about his emotional details in his drawings Finch responded:

"It does come from both personal…

Beware! Do not buy wigs from eBay by a seller "wiggingandweaving1" - see reason as to why

I have bought items for 15 years on eBay with no problems but if you are going to buy a wig do not buy from the seller "wiggingandweaving" because what you buy and what you get are two different things. I bought a Rachel Welch wig in blonde. When I received the wig it was brown and black and the cap was defective. So I contacted customer service and the seller upon the time of arrival that the wig I ordered was not as described. The seller was aware of it and put a block on me and eBay…

So I've been doing some research on different hair units (trying to decide what would be best for me). I still have my own hair but I am tired of it looking thin and not feeling comfortable going swimming or even sitting in the sun without thinking about my scalp showing through. I don't want to take Rogaine and save my existing hair by putting foreign chemicals in my body. Anyhow, these are the options I have discovered and I'm wondering if anyone out there can shed some light on them…

This morning while my family was getting ready for the day my 4 year old was left with coloring (with our permission) for a few minutes. I came back after bring gone for two minutes to find she had cut out a chunk of her hair. I stared with my mouth open... This is probably a rite of passage for both Kids and parents but one that sprung upon me and that I am so sensitive to as a result of my hair loss. After I got over my shock I asked her why she did it. She said she wanted to give me her… Continue

I currently wear a synthetic fibre wig but am doing some research on "upgrading"  Human Hair wig. Based on my research, I believe Full Lace 100% remy hair is the way to go.

Problem is, there dont seem to be many suppliers in South Africa and options are limited.  I am also very afraid of getting scammed, for example paying for 100% human hair yet its mixed with synthetic hair!

I wanted to share this post because I wanted people to know that Raw Foods, especially combined with a Vegan or Vegetarian diet can be dangerous for some people.

I am very conscientious healthy eater and usually a fit, healthy and active person. I go on hikes, swim, run half marathons and about 6 months ago, had eaten a predominately vegetarian diet. I had been a vegetarian for over 7 years, with some parts being Vegan and on occasions, ate fish. My diet had consisted…

Does the pill affect AA?

I'm thinking of going back on the birth control pill. I have had some regrowth of my extensive alopecia areata, and was wondering if going back on birth control would make my AA get worse. In addition, have any of you had success with other forms of birth control? I hear so many horror stories about the pill, what have your experiences been with it? Thanks!

i am deciding weather to shave all my hair off or not.

This may sound stupid, but I have been diagnosed with Alopecia for about 5 months now.  Hair is thinning badly and hair is about the size of my fist missing on right side of my head.  I have been wondering if anyone has tried auto immune supplements that are sold in drug stores?  If this is caused my immune system then could these supplements help?