Eyeshadow and Eyeliners that REALLY last...?!

I have spent so much money - I mean - SO MUCH MONEY on eyeliners, eyeshadows...all claiming to be long lasting, waterproof, stays on for friggen ever....BUT - none do. Do you guys find that too? I've ordered from Cheryn Int'l - From a company in Canada - from Aveda - From Makeup Forever to Maybelline ..NOTHING seems to stay on - is it just me or is it the way I'm putting it on? I've tried the indelible eyeliner and the only one that stays on - sort of ...is from Target - called ELF...beside… Continue 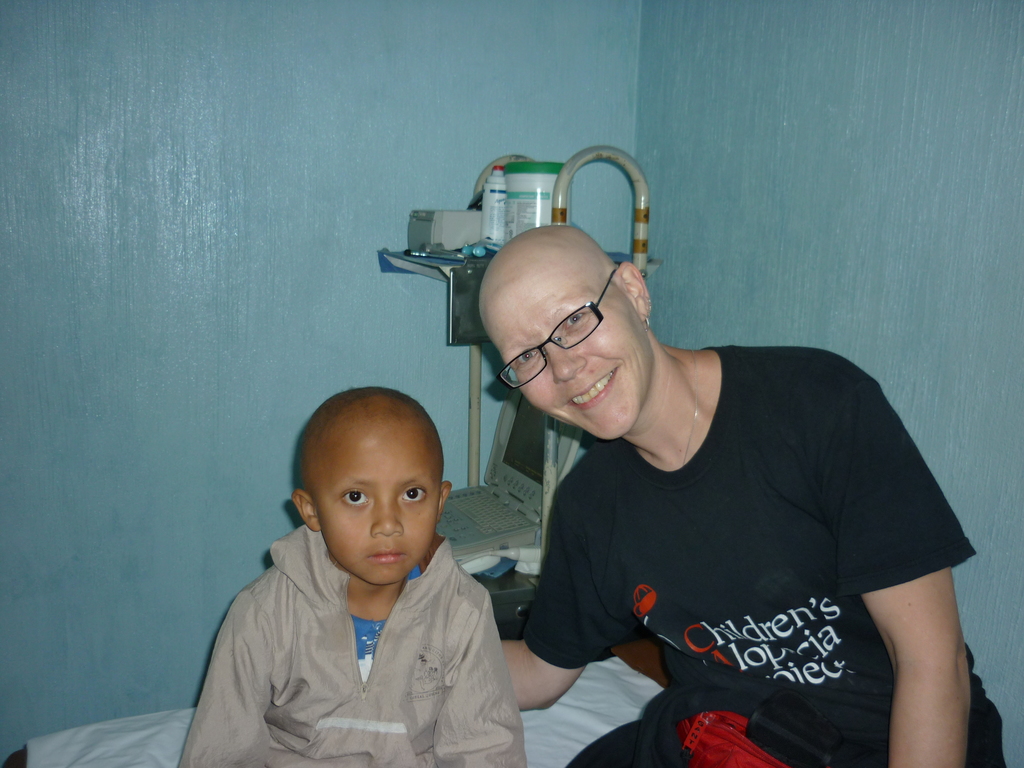 I've been back in Canada for less than 48 hours and am feeling very overwhelmed! The type of life style lived in a 3rd world country is very different however in many ways the people are richer than we are. There is a general contentedness that is unexplainable. I was lucky to meet with several locals in Guatemala however there was one little fellow I met that… Continue

This photo is of me wearing my "new hair". An awesome piece of new technology from an awesome man name Greg T Kirk who has teamed up with Clinic Del Mondo on the Gold Coast (QLD) to bring it to Australia. Essentially it's a thin membrane of some plastic substance, threaded with human hair, and glued to the scalp - lasting some 4-6 weeks. While Greg has worked with the technology for a few years in the States, it is completely new here.…

I am writing this morning to announce that I "came out" to two girls from work yesterday. It started with a conversation a week or so ago where one of the girls I teach with said she was going to try to run a half marathon and asked if I would want to do it with her. I am not a runner but it hit a chord because I have been struggling with the idea of going to a gym or working out in a public place since my alopecia progressed.

I fear my eyebrow will wipe away… Continue

My eyelashes on one eye fell out a couple months ago. They are finally growing back...slowly but they are so I am not complaining. I am just curious, is it normal that they are growing back snow white?

Does anyone soak in an Epsom Salt Bath? If so what benefits have you noticed?
Thanks

My wig fell off!

My wig fell off today. I got off the school shuttle and as I was walking ( and talking to my sister on the phone) I caught a branch and the wig flipped off. There were cars in front of me ( can we say embarrassing) I was in shock really so I stood their for a minute, and then I picked it up and went the other way...I put in my bag and kept my scarf on...the wig is wet ,idk if ill be able to wear it :-/ i didnt know whether to laugh or cry ( i did both btw lol! ) well just thought i… Continue

Thinning out a wig, lessening the shine and what type of mesh is best

I went to my first wig consultation last weekend and have a few follow up questions I need some advice on:
1) they seemed to be sooooo much hair, I guess because I am just not used to having so much hair on my head. Can a synthetic wig be thinned out so that it looks a little more natural?
2) I noticed that some of the wigs I tried on were a little too shiny. I saw on a website that you can either use baby shower or wash it in fabric softener and water to get rid of some of the… Continue

OK you guys I really need you today! I've been dating this decent man for seven years. He knows all about my AA and seemed to be fine with it. I asked him to become a friend to me here and he simply said no! His reason was because I was enough, why would he want to see more pics of people like me. IDIOT! I just wanted him to see how cool the pics were and how beautiful you guys looked. I'm beginning to see that people aren't always as comfortable as they seem, even family. I just decided not to… Continue

Ha well i said i would tell yall bout my 5th and 6th grade years hah well after i left saks elementery i went to Alexandria high hah well im just a liitle ol 5th and 6th grader sourrounded by all these tall creepy looking high schoolers (btw hah im really country talkin so if ya cant really understand me im sorry hahah) as i said before people will be mean! no matter who you are or what you look like. there will always be those people out there who are out to put you done in order to bring… Continue

A broken foot to go along with it!

So I'm still losing more hair, and definitely not excited about it, and on top of it, I broke my foot tuesday night!! I was walking down the stairs and tripped on my moms shoes she had on the stairs and fell 4 steps to the wood floor. Somehow I made it through the rest of the night with no problem, but then woke up wednesday morning in a LOT of pain with lots of bruises. My mom took me to the ER and sure enough, I broke a bone and tore quite a few things as well. So now I'm stuck in this space… Continue

I went bald when I was four. As far as ages to get an incurable illness go, four isn't bad. I have photos of silky blonde locks, but don't remember what I lost. I think that's a good thing.
It's pretty much the usual story - bald patch, size of a coin, doctors, comb-overs, blood tests (I still have the toy stuffed cat the red cross people gave be 'cause I wouldn't stop crying for those.) We tried a bunch of stuff - herbs, massage oils, etc. I have to thank my mum, a GP, that she refused… Continue

Just found out today that an elderly relative on my father's family tree had diabetes like my grandfather did. Since they say alopecia is related to the genes for diabetes and rheumatoid arthritis, I am getting closer to suspecting which side of the family to "blame!"

Well as long as we're venting, let's discuss my shins!

What the hell do my shins have to do with my scalp?

WITHOUT FAIL, when my shins start itching, my scalp starts within the next day.

How could shins and scalp possibly be connected?

Who thought up this madness?

And what, praytell, do I do with a bottle of Desonide (that's still at least half full) that no longer works on the itchy shins? That doggone prescription cost US$62!!

Do I have the right to be angry with my sister when I've asked her not to discuss her hair and she does anyway?

I've have diffuse alopecia areata. I'm trying to deal with it the best that I can, I barely discuss it with anyone anymore. Even though I am making baby steps, I am still very hypersensitive about it. I go through my ups and downs. My sister loves talking about her hair, something I just can't listen to. I've asked her MANY time that I don't wish to discuss her hair. I TRULY don't care about it. Well, she called me to tell me that she just got her hair cut. I told her that I really don't care,… Continue

Well I went today for my first consultation and it went better than I thought. The stylist showed me a couple different options before she got to the wigs(what I am going to be doing). Since my hair is continuing to thin and the lower half of my hair isn't really enough to wear with a topper, I have to go with a full wig which was what I was planning anyways.
I got to be a blond with a bob cut, a long haired blond, a long haired brunette and cousin it! LOL! I even looked like Shrek's wife… Continue

I took the big step

I finally had the courage to shave the rest of my hair off.It has taken me a long time ,but after getting out the shower the other morning all of a sudden i said to my husband todays the day ,i am ready to take it off.I feel better now looking in the mirror i do have regrowth from steroid injections,and i am hopefull that my hair will come back. I feel that i have to look for the positive in all this turmoil, maybe god is teaching me patience, tolerance , kindness, to others? ummmm think i just… Continue

I miss my hair

Right now I feel sad . I miss my hair . I have some regrowth but not much . I guess some is better than none . Right now I'm not shaving my head because it is so cold outside. I'm hoping to get a wig in a few months but it seems forever away . Part of me wants to try to let my hair grow , the other part says just move on with your life . I always feel stuck ! I do not regret shaving my head . I did it to take control . I just miss my hair right now . I'm afraid of growing my hair out & it… Continue

Hey Everyone! I'm just looking for a way to get some people in Ottawa together. I've searched the site for people in Ottawa, but I know for sure there are far more people out there that aren't neccissarily on this site. Any ideas on how I can get the word out, I'm all ears!