So I had Folliculitis and was able to maintain another outbreak for about a year. My old bald spot was about 2.5-3 inches long and I was wearing clip in extensions every day to give body and length til my hair grew back. I was feeling good until about a month ago it really started to fall out again. I thought it was a new outbreak and went back to the dermatologist but now I have AA! My clip ins still kinda work, but soon my hair won't cover the tracks. Today the clips…

How and when I learned about my Alopecia

So i know you all know how i feel about alopecia now but here is a little about when and how I reacted when I first found out I had alopecia. I was…
Continue

Charity Bailey, co-host of RightThisMinute.com, is helping spread the word about women and alopecia by featuring the powerful story of her own sister's battle with the hair loss disease.… 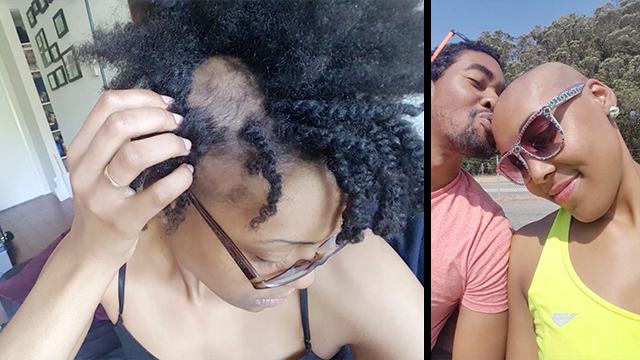 My 11 year old daughter was just diagnosed with alopecia areata a month ago.  We started her on the steroid scalp drops and after a few weeks of use her scalp is now covered in terrible acne.  It's painful and seems to be more prominent in the areas where there's still hair.  The bald spots don't have nearly as much.  I can't get hold of her doctor and the pharmacist just said to quit using the steroid until I talk to the doc.  Anyone else had this reaction?

Feeling depressed about my wig

I got a wig a few weeks ago.  I spent $550 on it.  It is synthetic.  I like it, but to me it looks so fake.  I've worn it about 5 times now and I have a hard time getting the part right.  I feel like I have a melon on my head.  I still have a lot of my own hair left. I am losing it in top middle, on the sides and at the crown.  I don't know it that's what is making me feel like a melon head or not.  Also, I don't feel like I can do a lot with it (like putting the bangs back) without it…

Hey everyone, So I was diagnosed AA on Nov, 2015. i have seen many doctors in the city and none of them have actually helped me. After a long wait, I am being treated by Dr. Brett King from Yale University. On July 8th, i had my first appointment. He wanted me to start taking Xeljanz but i refused to the idea of being exposed to Cancer and other side effects. So he gave me 3 pulses of prednisone of 350 mg that i took 1 day only and it would be good for the whole month.

I live in Arizona.  Does anyone have experience or advice for wearing a wig in 100+ degree weather?  My job sometimes has me outside walking from location to location.  I bought my first wig yesterday and wore it today.  Luckily it went well and it wasn't as hot as it normally is, but I am stressing out for the days ahead.

Hey everyone! My name is Christos Kyrgios from Australia - just a quick post to let you know I am doing a clinical trial of the JAK inhibitor Xeljanz now. My friend did it, he has universalis like me and he got all his hair back after 2-3 months of being on the medication.

I am documenting + doing this trial to raise awareness and to test the viability of the medication. Exposure on this type of thing if successful will hopefully get the medication on approved government funding…

Hiya I'm really new to this, I was just wondering if anyone could help me as I have a big bald patch and it seems to be greeting bigger all the time, I went to the doctors and they referred me to the hospital which took almost 2 months to get seen as they said there is usually a 3 month waiting list, when my appt came through I was hoping to get steriod injections but to my horror the doctor wouldn't give me them and gave. Me dermovate 0.5 lotion and told me I must use this first and come back… Continue

How do I help my child who is being bullied at school because of her alopecia?

Just last year my daughter, who is in elementary school, lost all of her hair. She's had alopecia areata for a few years but we always managed to cover her bald spots. All of a sudden all of her hair was coming out. It turned into alopecia universalis. At first she wore hats to school, then we got her a wig. Kids immediately made fun of her for not having hair and then for wearing the wig. When school got out for the summer she was so relieved. She had a great low stress summer but just…