I can't tell you how nice it feels to have a long day in the heat with a head full of hair ( wig) and come home to take it off!!
I sure do appreciate that while others have no way of doing that with their own hair and feel the nice breeze on a sexy bald head!!!
God Bless all of us who are bald we don't realize the pros about it very often but I just realized that pro today!! and let me tell you,,,, it feels damn nice!!

Hope you are all doing well...coping well with this most incovenient and expensive condition. I haven't been on here in a while. I am hoping to get some new tips and tricks :) I am still new to this and am grateful that everytime I blog on here I obtain a whole bunch of useful advice!

Over the past few months I got way too frustrated with synthetic wigs...so I bit the bullet and purchased a human hair wig. I was excited...couldn't wait to get it in the mail. A… Continue

I had mentioned before I have a stubby head except for the sides of my head , the stubs have been that way for a year now, doctors say its as good as its gonna get, and I still don't understand why that is, even though I know it is caused by my white cell count, but here's the thing, I'm always itchy leaving my head scabby whenever I wear wigs with a cap under it.
I try shaving it to releive the itch, I use soap and I can't seem to shave it right making everything worst and cutting myself… Continue

I was reading a magazine today and came across this poem by Mary Oliver. Im not a poetry reader much but this spoke to me and I wanted to share it with you......


THE JOURNEY by MARY OLIVER


One day you finally knew what you had to do, and began, though the voices around you kept shouting their bad advice
— though the whole house began to tremble
and you felt the old tug at your ankles.
"Mend…

Since I was a little tyke - playing slot cars , digging up the yard with my TONKAS or just lighting the woods on fire behind the house , there was only ONE exclusive BALD guy in Hollywood.

Ladies and Gents .... it was Telly Savalas .

Strong , Charismatic , Independant and Aint takin CRAP from no one !
Smart mouthed , razor sharp wit and always I mean always a TOOTSIE POP on board.

As I see my smooth eggplant in the mirror .... I finally get what Telly was… Continue

I was diagnosed with AA in July,2010. It progressed to AU in March 2011. After about 3 weeks of wearing false eyelashes , I developed a stye in one eye...it got serious enough for medication, now that eye is healed and my other eye has one. It has been a constant struggle to heal. I find myself constantly having to deal with debris in my eyes. Has anyone else had this problem? Is it common to have eye problems when dealing with no eye lashes? I am still trying to deal with this condition. First… Continue

So my hair had started to come back and I was so excited, but now after a very stressful 2 weeks of withdrawals from taking Cymbalta my hair started falling out again. I had most of the sides come in, was still missing the top, but now the sides are going away again. Thinking very seriously about a Freedom Wig. I know they are expensive, but I need to bite the bullet. My one BIG concern is spending the money and then not being able to wear it. Here are my questions.
1. I live in Florida it… Continue

I posted a blog previously about a movie called "Happythankyoumoreplease". It is an Indie film so it was in limited release to movie theaters. I live in a large city so I figured it would show in my city. Unfortunately, I was wrong. I guess it only played in NY and LA. So it finally came out on DVD not too long ago, and I finally got to watch it this past weekend. I give it a thumbs up. It was a little better than expected. It had some laughs, and some of the other characters were charming/… Continue

Anxious to hear about latest research

What did you all hear at the conference last weekend?

Well its officially summer in the River City. We have had fires everywhere for months (southern Georgia, neighboring Florida counties to the west and south). Even on some days when it was actually not too hot to don a wig I left it at home anyway, as I did not want to get that smoke smell in it.

Anyway, have a niece getting married soon. I already have me dress and hair (wig) picked out. I have always instinctively felt [pressured??? obligated??? i worry...] that for formal… Continue

So for those who don't know, my boyfriend of almost 3 years and I broke up back in Feb or March, because he couldn't accept me bald (I shaved the rest off in Sept '10). That hurt a lot, kind of temporarily damaging my self esteem. Well I've had this great guy friend that before I met my ex, I was kind of interested in more than a friend, but he didn't seem interested, and things just happened as they did. Well he asked me out on a date earlier this week, which was kind of shocking to me, but I… Continue

Well the inevitable is happening...and dealing with dating

I knew that when I stopped all my medications(which weren't really working in the first place) that I would just continue to lose hair. I just wouldn't think that it would be happening so quickly. I have noticed that my hair is thinning out even more on top and now more on the sides too. Not that it really bothers me now because I knew it was going to happen and I was preparing for it.

Red Dots in My Spots

Just curious if anyone else has this...red dots in your bald patches? I got the injections 3 weeks ago and since that time I've had red raised dots, almost pimple-like, in my bald patches. They are worse in the patches where I got injections. In the new spots that cropped up and did not get injections, I also have a very mild case of red dots but not as pronounced. I wondered if anyone else experiences this? And if so, how do you get rid of them? I tried an acne wash which did nothing, and… Continue

Hi. I joined this forum a while back and have taken so much comfort from all the fabulous people who have refused to let alopecia hold them back.
As a bit of background I have always had fine wavy hair but alot of it. My Mum, all her 6 sisters and all my female cousins have really, really thick hair (not that I am jealous or anything!). My hair has thinned after each of my children (I have 3 fantastic kids ages 4, 8 and 10 who really are my reason for living) but not to the point that it… Continue

This is something i've learned to do over the course of my therapy!!
I now walk around bald in front of my whole family, everyday unless I go out of course, i'm not ready for that just yet, but I am very comfy around my family and no longer ashamed to be bald around my family and it feels great, especially when the fresh air hits your nice baldy head :)

much happier me today :)

Many troubles over the months

I haven't been on in a while, and there have been some issues I've been having.
To start off, shortly after creating my account I found out I was pregnant. It was really tough to deal with that, my whole world fell apart. Everything I had planned, school, work, all my dreams were over. From there, things only got worse, I told the father, and let's just say he's not helpful. At all. He's lying, saying he can't be the father, telling people he's getting a paternity test, but he's been… Continue 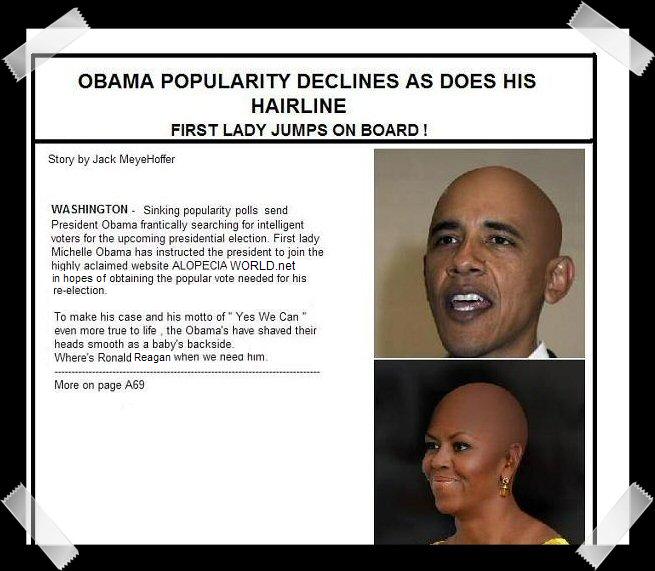 I just wanted to update everyone that it is possible to enjoy water sports with a wig. We went to the lake this weekend and my daughter went boating and when a friend of ours pulled up in his cigarette boat she didn't hesitate to jump in. He found several boats to race and goes over 100mph. She did not think twice about her wig. She then went wake skating and fell at least 5 times, I was her spotter. She has given up on eyelashes in the water but wears waterproof eyeliner and sunglasses when in… Continue

The other day I turned on the TV to have some background noise while I cleaned my house. I just left it on the channel it was on which was MTV. I typically don't pay attention to that channel especially this particular show. They were showing True Life back to back. One of the episodes was a recap of people on previous shows. One of the people was a young lady who had alopecia. It showed clips from the first episode she was on, and then it showed clips of her years later. In the first episode… Continue

It's been awhile since I've been on AW! I just wanted to pop in and let y'all know that I finally got my eyebrows permanently tattooed on this weekend! I lost my eyebrows and eyelashes in the Fall of 2009, and since then I've been drawing my eyebrows in using a combination of products. I actually never really minded drawing them in; after a few months, I got the hang of it and could draw them both on in under a minute! But I live in Washington, DC, and the summers here are… Continue