All of a sudden it just seems like I've got so much on the go with alopecia! My next support group meeting is in June and I'm looking forward to seeing everyone again as we celebrate our one year anniversary!!
Thanks to Mary, I suppose?, I will be doing something for National Bald Out Day in my Canadian community but I haven't decided what I'm going to do yet. I'm thinking along the lines of a head shaving or people can sign their names on an alopecian's head with henna and that way we'll… Continue

I'm pleased to say I've had some regrowth in last few months. My eyelashes grew back in my right eye and I have some eyelashes in the left eye. My eyebrows are starting to come in too! The white hairs are gaining pigment. I have several black patches on my head. It doesn't seem like much, but I'll take it. My family and friends are telling me its a good sign, but I don't want to get my hopes high and then nothing happens or it falls out again. It would be nice to talk to someone thats had… Continue

does anyone have any advice?

i'v had alopecia on and off since i was 10. in the last year it has been at its worst. i'v lost all the hair at the the back of my head and about 3 circle patches about an inch in size each at the top and right side of my scalp. its getting very hard to cover so have started wearing hats nearly every day with the exception of going out to pubs etc.

i have been told about net weaves, but since my hair is still coming out i dont think its strong enough to hold it. i'v… Continue

There once was a woman who woke up one morning, looked in the mirror, and noticed she had only three hairs on her head.
Well, “she said, “I think I’ll braid my hair today” So she did and she had a wonderful day.

The next day she woke up, looked in the mirror and saw that she had only two hairs on her head. “H-M-M, “ she said
“I think I’ll part my hair down the middle today” So she did and she had a grand day.

The next day she woke up, looked… Continue

Blessings to Cheryl and rj

For every star to wish on in the universe, I wish for a moon for you to share together. Congratulations and sincerest blessings

My story and my current dilemma

Well, I am not sure what it is I have. From the pictures I've seen, its not alopecia areata - that seems more like quarter size circles, or areas, where the hair falls out completely. My hair looks more like female pattern baldness. I've lost the hair gradually over the last 6 or so years, mostly on the top and crown and now on the right side too. Fron the side, you can pretty much see the outline of my scalp, and I'm doing the comb-over thing from the left side over the top of my head, which I… Continue

I did it! Just booked everything and we are ready to go!!! My fiance Kevin and I are eager to meet new people! who else is in?

all the children in her class wear bandannas

Hi, My name is Tasha and I am new to this whole alopecia world, as of yesterday! My daughter Sierra Sue is 5 1/2 and has had alopecia for over a year. What a journey it has been. Ive done so much research about alopecia. When she was 1st seen by the family doctor for her quarter sized bald spot, she said it probably got rapped around a toy and pulled out. I refused to excet that as an answer and ended up researching. Alopecia is what I came up with, never hearing of the issue before I was… Continue

My first patch of hair fell out mid Dec 2008 and i didn't know till my teenage daughter told me i had a bald patch! I thought she was joking till I looked in the mirror - it was such a shock. I am 37yrs old and since December the patch has got bigger & bigger and is now approx 4" by 2.5" and i am finding it difficult to cover. I have been sweeping over hair but as it's on left top of my head and getting bigger it's not covering so well now. Today I could not cover it for work & bless my… Continue

I noticed I was losing more and more hair in June of 2000, at age 15. We had no idea what it was, I had read about Alopecia once in a magazine, but it sounded like a nightmare, I loved my hair. I relied on it really. And then it didn't stop coming out, clump after clump, it came from all over, no patches, and rapidly fell out. By July it was pretty Bad, August almost gone. Just so thin all over.
I think it was July when we got into see the Dermatoligist in a city a few hours away… Continue

Just an update on me

Hi again. It's been so long since I last bloged and on my hair front a lot has happened - I HAVE SOME.
After shaving my head back in January I noticed a little bit of regrowth. Well that regrowth has taken off and I now have a full head of hair again (minus a couple of tiny patches).

Funny thing I have noticed since I stopped wearing a scarf, people are commenting on my new hair cut. A lot of people knew about my hair loss, but those who didn't obviously didn't get why I was… Continue

So I went to see Lisa Williams last night and had to wear a wig. I tried the old "comb over" but with the stiches in my head and the ever growing patches of bald spots I could not do it. I have a human hair wig. So I washed and styled it and hoped for the best.

Hot - does not describe it. Does anyone else ever feel like EVERYONE knows your wearing a wig or parts of the lace part are showing? Paranoid about itching a scratch on your head and feeling the whole thing move? lol So there… Continue

Cannot believe this is happening to me!

HI I am a 40 yr old mother of 3 young children and I am also my father who has leukemia's carer. I first saw a few bald spots last year and went to a dermatologist and they told me it was alopecia areata. I also have psoriasis which I have had since I was 8 so at the moment am having light treatment for that, but my alopecia was very steady until earlier this year when I caught hand, foot and mouth disease from my kids and I had blisters all over my hands and feet, it was a viral thing so I… Continue

Shock, pain and raw emotions...the good the bad and the ugly

I have been losing the most hair ever lately. One shower episode lead to two full handfull of hair plus two brush fulls. It was strange I didn't cry. But...my husband took a look at the back of my hair the other day. He was pointing out where all the spots were. I asked him to take me up to the mirror to show me...I was shocked and devastated. The back of my head looked as though a lawn mower had attacked it...awful. I bawled...I mean just bawled. It was a down to the bottom of my toes bawl… Continue 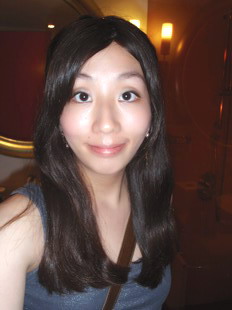 I just got back from my 7 day trip from Cancun. It was very nice, never seen water so blue, never seen they sky so clear, never seen so many stars on a dark spring night. One of the things I would like to share with you guys is I meet another alopecian on the trip. He was an alopecian universalis patient, very very sucessful man. He had 3 beautiful children, and a lovely wife. I was so excited to meet him, as I never meet any other alopecian in… Continue

Lydia Martin is a well-known, local to San Diego, fine artist who specializes in painting of emotion..... most, in fact about 98% of her paintings, the subject is a woman.... women show emotion in their face, their movement, their eyes...... her new series is called the Painted Lady project, where she has chosen models with a tattoo that tells a story, she loves the tattoo i have on my head..... well, I am the subject for painting #3 in that series!!! sooooooo excited! :) Lydia came over to my… Continue

Share your experiences with the National Alopecia Areata Registry...

I'm curious if anyone has gone to one of the centers locations and what kinds of things do they do to further the research of our condition.

I want to share with you something I did this morning in front of the congregation at our synagogue. Though I go everywhere bald, one place I hadn't done so was at services at the temple. Every Saturday morning when we go, I've worn one of my scarves. Until this morning!

Today's reading from the Torah (Old Testament - Leviticus ch. 13) is about skin diseases, baldness, and treatment by the ancient priests in Israel. I couldn't pass up this opportunity to… Continue

Guess I'm gonna have another round of hormone blood tests, because my doc insists on it. They're looking for hypothyroid and epinephros problems and stuff, but all I'm concerned about is my hair. I k…

Guess I'm gonna have another round of hormone blood tests, because my doc insists on it. They're looking for hypothyroid and epinephros problems and stuff, but all I'm concerned about is my hair. I know this is kind of shallow, but what? I'm a girl;) My hair means a lot to me. All my life it was curly and silky and thick and now it's suddenly getting thinner and thinner, and here I am - spending hours in front of the mirror every morning swearing like a sailor trying to hide a bald patch my… Continue

Buying a Freedom Wig in the UK

Hi All!
I've recently decided to purchase a Freedom Wig and i'm trying to find out as much as possible before i go ahead with it all. Just wanted to know if anyone has purchased a Freedom Wig recently and what their experiences were, good and bad. I've found a couple of places in the UK that supply the freedom wig but if anyone has any advice or recommendations it would be really helpful.
Thanks, Melinda