Diphenylcyclopropenone (DCP) treatments for my son

Ethan (my son) is scheduled to begin a treatment with diphenylcyclopropenone (DCP). I've have been reading up on this sort of treatment and noticed the horrible side effects. My son already suffers from exzema and so afraid this will really effect him.. Can anyone please share your DCP treatment experience with us. I'm not sure if I want to put Ethan through this. I'm so new to all this. Seems like we just woke up one day and his hair was all gone from one day to the next.

Scene: Dining-in at a fast food restaurant. 8 year old or so boy bounces past my table. He takes 3 steps backward and stops. Deep stare. I smile. He bounces on with balloon in hand.

Hopefully he'll become a little more discreet in the future or at least stop long enough for me to explain that yes, I am a bald girl.

I definitely can feel a turning point in this entire process. I have been so aware of myself going through each of the 7 stages of grief.

Stage 1 - Denial
Losing my hair has been a process. Last year, I was at a sales conference in Chicago and I felt a smooth spot on the back of my head. When I got home from my business trip, I asked my boyfriend to check it out and he said it looked like someone had taken a lock of my hair. This was the first of many times that I used the two… Continue

Hello everyone or should I say Aloha.
My husband Vince & I just received our 2010 2nd Annual NBO tee shirts. I must say the Cafe Press has done a fabulous job with a great selection to choose from.
I ordered a white tee for Vince & a Pink one for me. They arrived today, I/we are so pleased, they look, feel & fit great.

I am so very excited & looking forward to celebrating the 2nd Annual NBO, this wonderful celebration will take place while Vince & I are… Continue

Inspiration and Courage from ‘Across the Pond’!

All over the world, there are women blazing a trail towards more acceptance for women with medical hair loss. Danielle Baer is one such brave beauty from ‘across the pond’. Danielle, who lost all of her hair at age 18, speaks on British television about the impact Alopecia has had on her. She explains that she grieved the loss of her hair but now actually likes the way she looks bald. Sadly, though she feels comfortable with her baldness, she feels… Continue

We are not alone

Don't feel ashame of being bald. It's a disease, called alopecia, an autoimmune disease which the hair follicles were attacked by the host immune system.
I didn't learn about the fact until last year. well, I am ,kind of, knowing a little bit about it, but just not really tried my very best to find out the information, even I am a nurse.
I know it won't be me only in this world has the problem, but I didn't like to talk about it. Because I need to explain and tell people about my… Continue

Emotions are crazy things. I haven't felt this out of control of my emotions since I gave BIRTH! I start off the day feeling strong, then a little thing happens that really shouldn't affect me, but LOOK OUT! I get full of adrenaline and anxious and ANGRY! I get s-o-o-o-o-o-o-o-o-o angry sometimes and I just want to cry and rage, but, of course, I can't! I actually visualize myself throwing a tantrum: kicking furniture, throwing tables, punching walls, screaming, etc. Then I wanna cry. and cry.… Continue 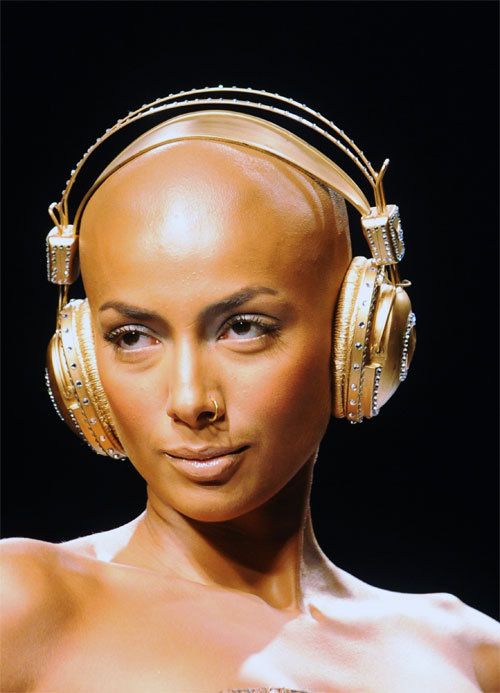 I found a picture of a gorgeous bald model who was recently photographed during the Wills India Fashion Week Winter 2010 in New Delhi. (Gold headphones were a creation by Indian designer Siddhartha Tytier.) She is stunning!! Way to represent us baldies!! :D

An ode to alopecia

Oh alopecia, how you do frustrate me....

I was so angry at you when you first took my hair - and I got in first and shaved what was left off before you could take it. I was especially mad at you for taking my eyelashes but I slowly adjusted. I didn't mind that you took away my body hair and relished not having to shave my legs anymore. I was actually happy when you took away the rest of my head hair because it meant I didn't have to shave it off anymore to wear my vacuum… Continue

"When you get into a tight place and everything goes against you, till it seems as though you could not hold on a minute longer, never give up then, for that is just the place and time that the tide will turn."

ok soo i have alopecia i was dianosed at the age of 7 and ive had it ever since then... thourgh the years of having this coniditon or "disease" as some people may say...i have been thorugh alot and i mean alot i know most of the people understand what i mean when say ALOT between the people around me that use to constantely pick at me calling me things such as freak,baldie, ugly,patchie(the worest one ever!),mistakeing my gender,making fun of me for wearing femine looking outfits,getting told… Continue

Another turn around the sun... Last night was pretty awesoime. I was asked to put in some extra hours of work at a charity fundraiser hockey tournament featuring old Hockey Legends playing a fun game against the Montreal Police Hockey League.
I still have no idea about hockey and all the big players, but names like Igo Kravchick and Lemiuex were all there... and at one point they even invited a Tiny Tykes team of 6 year olds to play against them for about ten minutes.
The show was… Continue

Of Wigs, Fringes and Pills

My grandmother was visiting for a week and she demanded that I bring her out on shopping sprees almost everyday. As I am merely an underling grandchild, I had to oblige. Besides, she bought some stuff for me. :D

The first day of our outings, I wore that wig I bought, out. FOR THE FIRST TIME. It was nerve-wrecking really. The people on the streets were staring. I was hoping that it was because my hair looked fabulous, but I think it is because it looked fabulously wiggish. :/ But I… Continue

Since hairy apes walked the earth many years ago,small changes have occured in each genration,they gradually started walking upright and using tools and finding shelter and got better at keeping warm,so generation by generation the need for body hair was reduced which brings me to my point- that we alopecians are obviously the next step in this evolution. Our bodies have realised that the need for hair for warmth is no longer needed ,so it doesn't waste the energy growing it.I know its… Continue

A friend of mine recently emailed me asking me what I thought of permanent eyeline and eyebrows for a guy.
For me, it isn't a choice I've ever thought of - I have been hairless in public sine 1996 when all my hair finally all fell out for good and I REALLY like being a hairless human.
I do know a handful of alopecians who've had their eyebrows and eyelines done. I know some girls who have shaved their eyebrows shaved off and not regrown back, and they Henna them every so often when… Continue

Before I had alopecia over 40 years ago, I realized how nice it was to meet with family and friends and to enjoy each other's company. They were there to talk about world events, other family members and for me to discuss with friends what couldn't and wouldn't dare talk about with my parents.

We are not our hair!

I was diagnosed last week with Androgenetic Alopecia by a doctor with the worst bedside manner I've ever come across. He basically said "You have Alopecia and you're gonna go bald, but you'll keep a ring around the back like a balding man and there's really not much you can do about it."

As you can imagine, I was mortified and walked around shell-shocked all the rest of the day. The thing is, it actually wasn't that much of a surprise diagnosis, because I have had thinning hair since… Continue

People can surprise you, if you let them in

Since I've been more open with my friends about having alopecia, I've been feeling really blessed to have such wonderful friends. They have been so supportive and very caring.

We had a huge night out with a ton of people last Saturday and I was wearing one of my long hair wigs. It was also the first time many people had seen me in long hair instead of my bob. I knew people might ask and that was fine with me. I was just wearing what I felt like wearing.

Sure enough, one of… Continue

It is just me?

Whenever the topic of hair loss comes up, people always praise me and are astounded by my attitude about my alopecia.
Its as though they feel it is something so terrible and dramatic... and that the average person would be in crisis.

Am I wrong having a positive/nonchalant attitude toward alopecia?

I was 16 and popular in high school when my hair fell out. I didn't think it was a big deal back then and don't think its a big deal now. Many people told me "High school… Continue

Ok...so I know the convention is in Indy and I have received the info. on the cost....but the bottom line is I just can't afford it! However, I will be in Indy that weekend and I would love to know if there is any way to just be apart of one of the social events? I have never been to a convention and I know that they are something special, there is just no way we can afford the ticket cost. Any suggestion out there?