Surprised by the outcome

yesterday I had decided to show everyone on facebook who I really am! I posted the same photo as I posted here and boy was I was surprised at the compliments I got about it.
It felt good knowing that no one has put me down but rather showed their love and support including my own father who told me <" wow that's not bad at all"
It all made me feel really beautiful now if I could just find the strentgh to see what tney see then maybe i'll feel better about… Continue

I love fashion magazines. I can't really explain why but I love the artistry of design. Have you ever noticed (those of you who read them) that when they publish a feature about "hair loss" alopecia is NEVER mentioned??????? Why is that?? Do we need to have a louder public voice?? Just a thought.

I have had alopecia for about 18 years and this time is the second time I lost all my hair and first for eye lashes.
I have been using onion juice on my scalp for the past month, 2 times a day,since I do not have any hair I figured I have nothing to loose.
do any of you have any experience with onion juice? 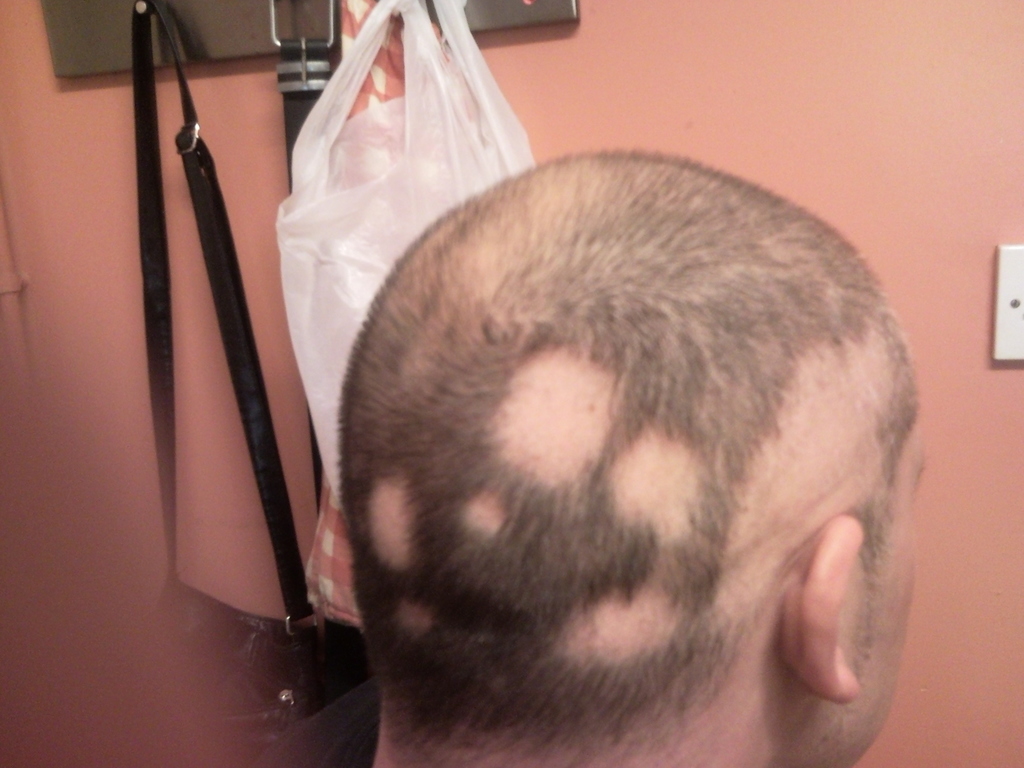 Hello my name is Darren
i have had this for 7weeks now which just started off as small coin shaped patches.
As you can see it is alot worse now,do you people think this spreading all over.
I`am just about ready to get the razor out 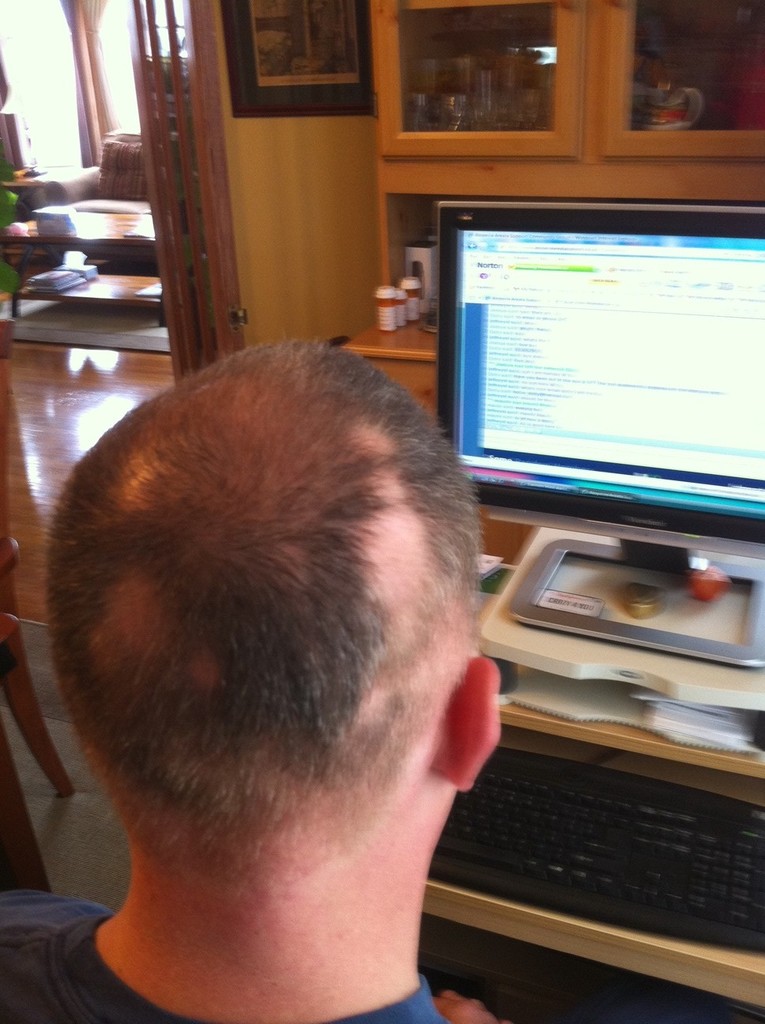 Hi All,
I thought I would share a few pics of my current regrowth.
For those of you that arent familliar I was AU for about 2… Continue

I finally had the courage to post my first bald picture today, I was scared thinking what would everyone think?
I supose that is my only fear in life, I of course never walk around my home like as zi know I get strange looks from my kids,I feel like i'm an embarrasemnt to the and I always have to wear a crazy bandana over my head which normally gives me a massive headache.
I only want one wish in life and thats to have my children accept me for who I am, and maybe one day they woud… Continue

I have started a group for those of us with androgenic alopecia. I hadn't seen one specific to our type of alopecia, so I figured I would start up a group. Come join me if you are one of my friends, or soon to be friends, with AA(androgenic alopecia)!

My daughter started going through alopecia in July 2010. As soon as this started happening to her, Grandma put her on mega kid vitamins. Her hair was growing back but still falling out. It was slowly growing even at that. But we had no idea what this was. Took her to the Dr. and they told us there's no cure. Anyways. I found out her Iron was low so i put her on Iron and vitamin c. Her iron is normal now but thinking I might check again to see if i can make it higher normal range. She was anemic… Continue

Has anyone else out there tried any 'alternative' therapies &/or supplements that may have helped with their alopecia?

I first started with AA (aged around 40) and it developed into ophiasis form all up the back of my head and around one ear. I went to my doctor who found that I was anaemic so prescribed iron tablets. I was taking three tablets a day and it was yuk! He also suggested vitamin B complex and zinc so I added those to the shopping list!

At the same time I… Continue

im tired of seeing clumps nd clumps of hair fall out, wether im in the shower or just running my hands through my head (its super itchy right now so its hard to avoid) i know this just started happening to me but i wish it was over already. nd i know it getting all better if just wishful thinkking so ive sorta accepted it so i just wanna get it over with, just have it all fall out. no more worrying about covering random spots. no more worrying if maybe i didnt cover it right or if a new one… Continue

Hey everyone! i promised to update once i went to the model scout event i blogged about last month! well i went there bald! lol and the agents asked me how long ive been without hair , i told them since last summer ( thats when all of my hair completely fell out) and i also told them that i have alopecia! and how it was my first time coming out without a wig , (one of the agents high fived me lol) they told me ive got great height, a nice shaped head, and a pretty face and that i stood out but… Continue

Last Weekend I decided to show my boyfriend what I look like when I am bald because he was getting frustrated about me crying because I have alopecia. He has always told me that he didn't care that I had alopecia, he only cared about how it made me feel. Sometimes I know that its hard for others to have empathy for what I'm going through everyday but they can be sympathetic. I only want to feel good about myself and I can't always because all I can think about is not having my own hair that I… Continue

Allergic to the wig shampoo?

Has anyone else had any issues with wig shampoo/conditioner? I have had my wig since mid February but just in the past week I have had dermatitis on my ears and now it is on my cheeks. I don't know if it is possibly my wig shampoo that I am using.

I am using the products that I got at the salon, but I also bought some online so I am going to try washing it with that shampoo tonight. Just curious if anyone else has that issue.

My scalp is a little itchy too, so that is why… Continue

It's been quite some time since my last blog post, but that has a reason!
Since last summer my hair has been growing back!
I didn't wear my wig anymore and after some time I had a full head of hair again :)
I was (and am) so happy with my hair!
BUT... since last month or so the bald spots have come back, return of the bald spots! Grrr
I don't mind it too much but still, it sucks.
And I've been thinking, i've been getting bald spots mainly every… Continue

So I bought these beautiful wig peices, very curly,however I have no clue how long they will last,I got a good pointer from a friend on here.
Does anyone know if I water spray the curls will they lose it's curls after a while? it only seems to tangle underneath due to rubbing against my shirts.
These wig peices are driving me nnutd even tbough they look very nice, i'm almost afrais to wear them.
If anyone has some tips for me i'd be forever gratful.
(my curld are like locks… Continue

One shower and Poof! There went all the rest of my hair! Omg it was scary how much just came out at once! It has been a slow process up until now! This was frightening and a tad sickening. A year of AA and you get used to a lot of hair coming out all the time, but this was....disgusting. =/
I officially can't wear the wig I just spent so much money on because it clips to hair...now there is not enough to clip to...Anyone on here who still has hair want to buy a wig? lol
Fml
first… Continue

Does anyone have any funny stories?

I just recently discovered AW and have been reading a lot of your stories. Understandably, many of us get bummed out about our condition; particularly the people who are new to it. But in reading many of the posts I've also been reminded of some of the funny things that have happened to me in the 32 years I've been dealing with alopecia. These stories took place during the 3 1/2 years I tried to hide my AA with a wig, when I was 18 - 21 years old.
Back in my late teens and early twenties… Continue

Out in the world with my bald head

My husband and I went to Target for some household essentials. I happened to meet him over in the men's section where he was trying on pants. I saw a few caps that were very unisex looking, thought I might try them on and pick one or two up for the summer. Funky looking little caps, right up my alley. I was wearing a Buff. Of course, in order to try the cap I needed to remove my buff. I walked over to the full length mirror about 5 feet from where my husband was. I removed my buff put on cap… Continue

about three weeks ago i was getting ready to run some errands with my husband nd my son. as i was packing my sons diaper bag my husband came up behind me nd smoothed my hair as he had a confoused looked in his face nd said "what the ... " i asked him what was the matter but he just kept staring at my head. i asked againg what was he staring at, but he said he didnt want to tell me, im guessing he didnt know how to tell me so he took a picture with his phone. i was hoping it was baby food since… Continue