Just some ramblings about my sucky day

I have AA (more than 50% hairloss) and i am currently attending my victory lap at highschool. Last year i wrote a letter to my principal stating that i am allowed to wear my hat/hood inside of school and in class rooms when ever I feel uncomfortable and if im cold as i have no hair to insulate my self. The Principal said ofcourse and the Vice principal already said that it was no problem.

Now this year Everyone can wear a hat in school but not a hood. This school year I also… Continue

My ayurvedic doctor Sunil Joshi, in Albuquerque, New Mexico, helped me clean and purify my body and that was the first step towards getting my hair to grow back. Now it is almost completely back after ten years of alopecia, four of which i had A. universalis.

It takes time and strong will, but it works and Dr. Joshi is fantastic.

There are many other ways of cleaning out the body, mostly getting rid of environmental toxins, and all sorts of poisons from "big pharma".… Continue

Needs a wig in the UK

Hello, my name is clarabella and I am thinking about shaving my head for the first time. I would like to get a wig to wear during the day for work. Can anyone give me some ideas about where to go in the UK, and what to look for? Thank you so much!

A bandanna tan from not wearing sunscreen.
(This isn't really a like, but it makes people laugh when you're walking around with a bandanna tan) 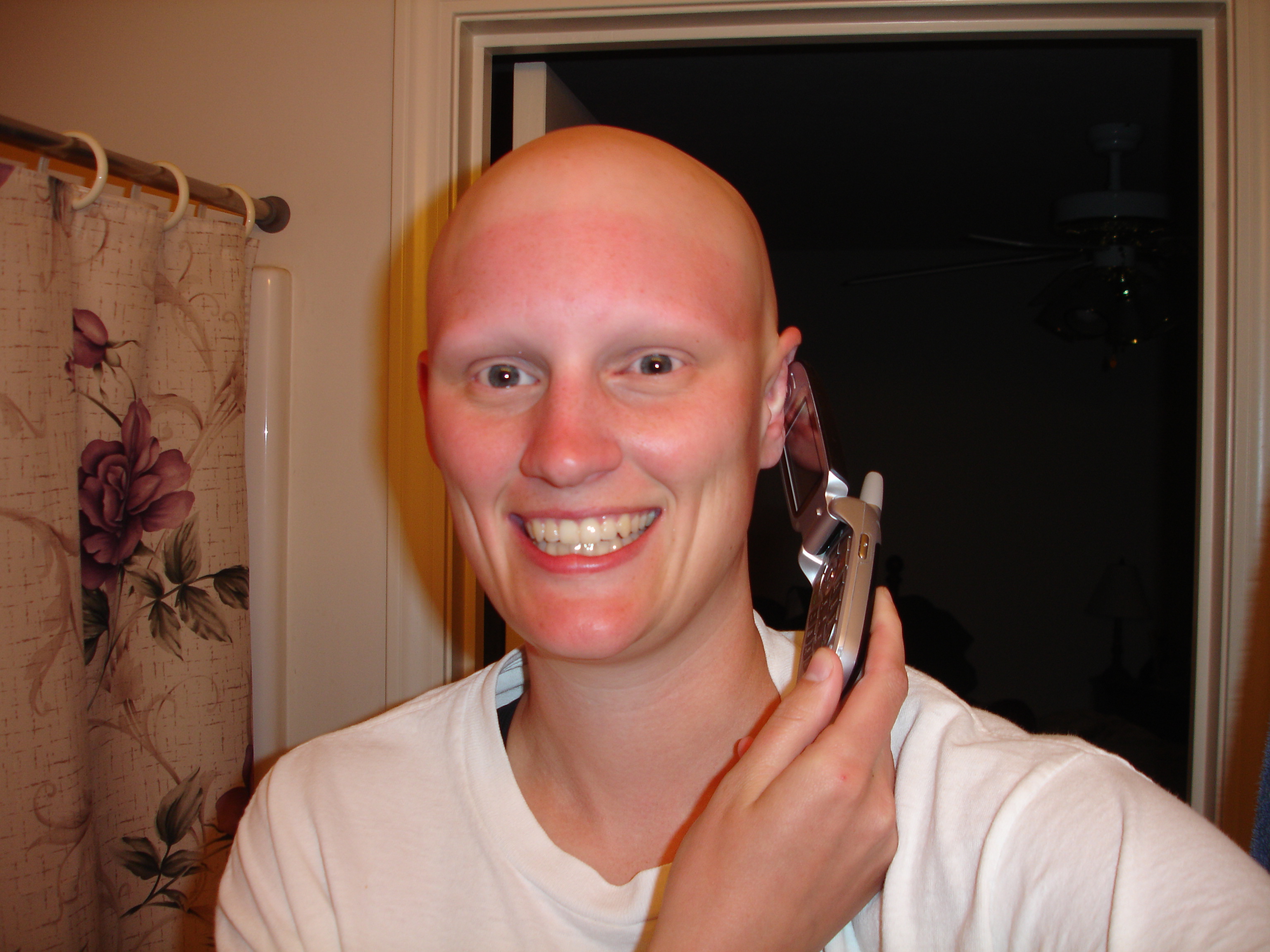 I am new to AA and have some new growth so I dont want to wear a wig that will damage my new hair. I am looking for one though and would appreciate any info or advice that anyone can offer on wigs. My natural hair is highlighted_alot of blond) with some brown. and I dont have bangs and is passed my shoulders. So I would like a wig that can be colored and has no wigs and is healthy for your scalp. Any suggestions?

Doe anyone have any info of what causes this? Is it always that… Continue

Hiya everyone, I'm really beginning to think my AA experience has been triggered by some thing in the environment. I began to lose my hair in Oct 09 during which time my husband began having major skin issues (dermatitis type). He also experienced a bit of what looked like AA through his beard area. My hair completely fell out then regrew. A few months back my hair started falling out again, a lot slower this time but still falling out. Next thing hubby's hair is falling out too. Definate AA… Continue

This summer I did some service projects in Las Vegas. One night I had to go to the emergency room with a friend who had a minor ailment. I sat across from a lady who was in scrubs and had noticeable bandages all over her body. I gave a little smile and she said, "I bet not having hair makes it cooler outside." I'm not sure if hair calculates when the temperature is 120 degrees F. We both laughed and she asked me what happened to my hair. In the middle of my alopecia explanation it hit me on how… Continue

To dye or not to dye?

Today I brought a light brown hair dye. Since I found my first patch I haven't had my hair colored. I have always been blonde and always went to the hairdresser to get it done. I have been too scared to go and get it done, since the alopecia, I went and had a cut and that was scary enough.

I'm now at home wanting to color my hair as I have this horrible re-growth happening and I feel really horrible with it, my re-growth is a dark blonde/light brown. I have a lot of new re-growth and… Continue

Lessons from a thrift store...

Question: What cost $6.75, is black, looks fabulous, made my day, and goes perfectly with my $50.00 Beverly Johnson wig?

Answer: The results of my last trip to Goodwill.


Shopping at Goodwill (or any other thrift store) can be a great activity. Mining the rejected, the odd items, the used, the marginalized, the ignored, the passed over to find a true gem that speaks to your personal style is gratifying to say the least (at least 50% of my eclectic wardrobe has been… Continue 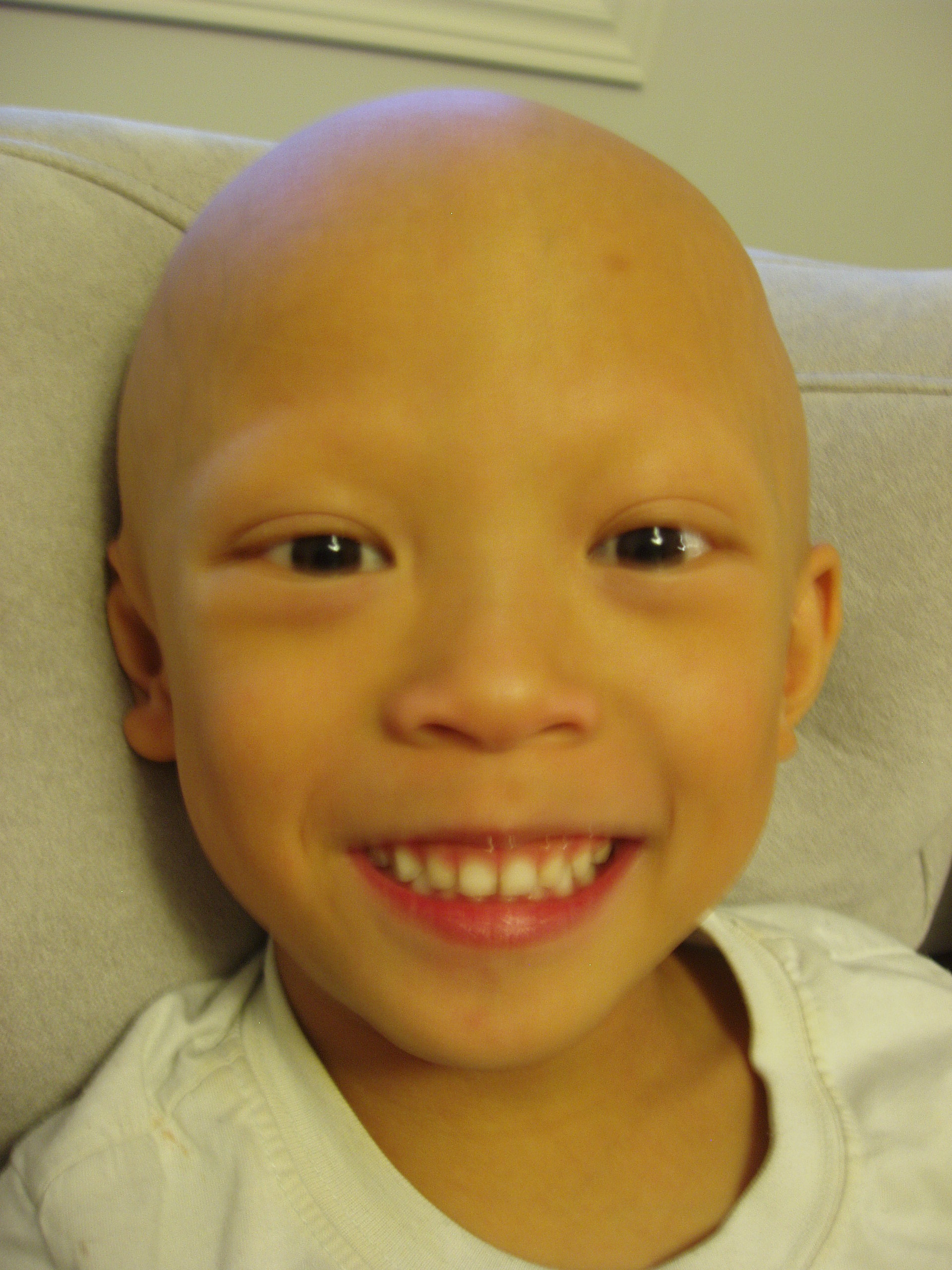 Sept. 2, 2009, thanks to Christine's blog & the continuous update on Kyler's progress, we finally got in touch with Dr. Gonen via Facebook saying that we are READY to try this treatment on our son, Joaquin, who's had alopecia areata since October 2003. His staff from the Hair Institute replied to my email and later sent a questionnaire which we gladly answered attaching scalp pictures of Joaquin. Afterwhich, Dr. Gonen himself called me on my cell… Continue

i finally got my tattoo
and ive had alopecia for 10 years! so i suppose this tattoo is a happy anniversary to my bald beautiful head, its not so white now.
and i plan on getting another one! 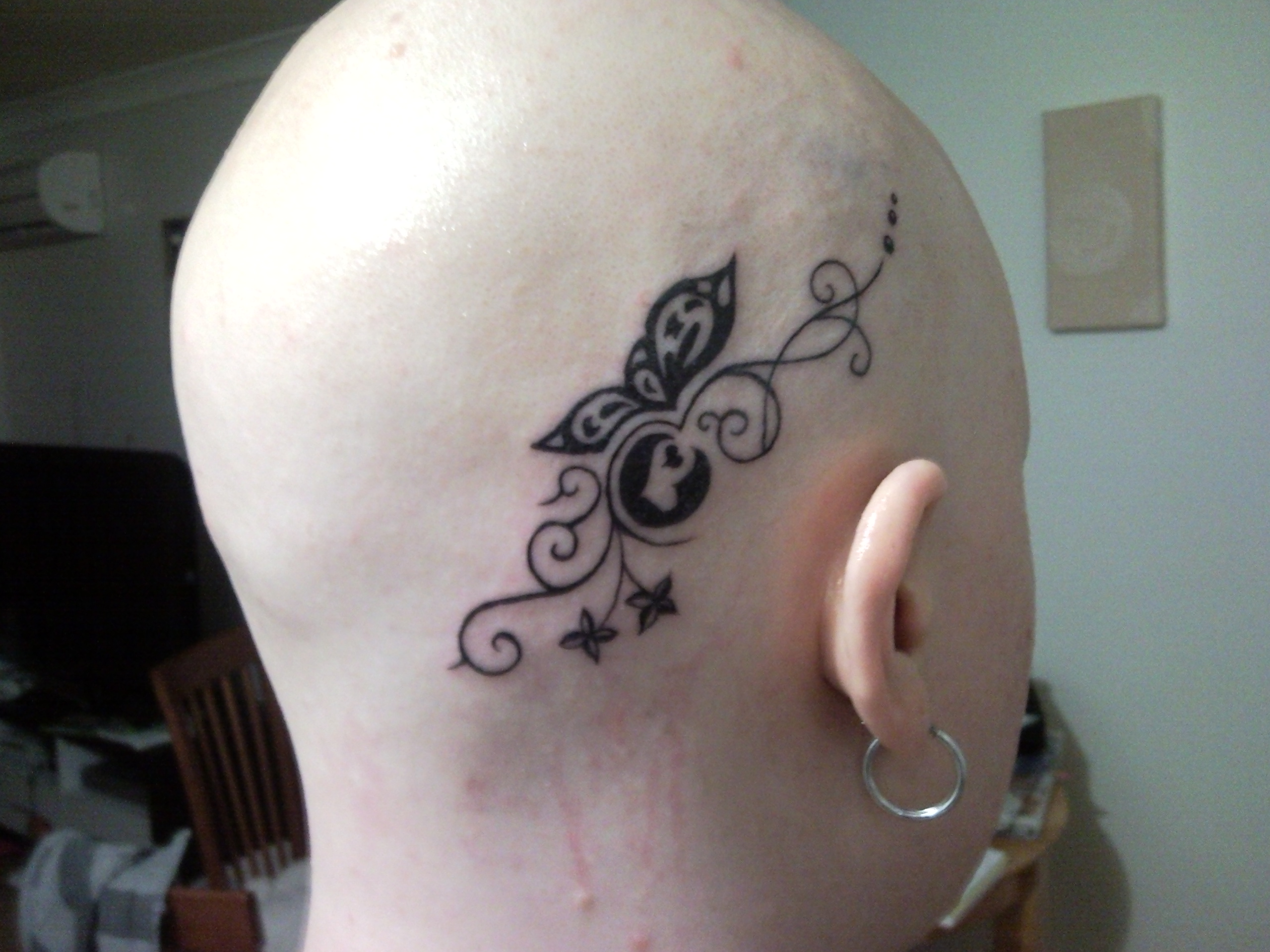 i haven't had an "episode" (as i call them) in about 2 years maybe, but a few months ago i started noticing a patch again. tried "waiting it out" to see if maybe it might start growing back on it's own, and also because i dont have insurance because i'm a full time student and my job works me just below the amount of hours needed for them to offer me insurance. nice, right?? so finally i found a new dermatologist to help me, as my previous doctor had retired, and went in to start another batch… Continue

Hiya All! Was just wondering if anyone else out there thought/felt that they had to change their style of clothes after they lost their hair? Just kinda curious, as I know that I did a little - just felt that somethings didnt quite suit the same. Mind you, I was like that when I used to change my hair colour or hair style (maybe it's just me) ha ha. Kirsteen x

God only made so many perfect heads. The rest he put hair on!!


SHORT & SWEET!
"I AM O-V-E-R iT"
I AM, SO OVER IT!
I AM NOT iNTERESTED iN HEARiNG ANY OPiNiONS ANYMORE.
Those Opinions, which have a Negative Impact from "OUTSiDERS"
SO jOin iN...BE STRONG...BE ABLE & WiLLiNG TO EMBRACE THE AUTENTiC YOU.
BE POWERFUL...
For, to give in to outside opinion...would be giving up on"YOURSELF"
iF YOU WiSH TO WALK BEHiND SHADOWS...THEN WALK WiTH MiNE!
At least you can walk "FREE" & Learn how Important… Continue

Hi Everyone- I guess to start I should tell you about myself. I'm 20 years old and attend college in CT although I am from NY. I began getting spots when I was 7 years old and they had been on and off for 12 years until last year when my hair began rapidly falling out. I decided to beat my own body to it and shaved what was left and had a wig on within a week. I've now lost all the hair on my body including my eyebrows and eye lashes. I honestly can say that I don't remember crying or getting… Continue

I guess the last blog I wrote was before I took my trip to Philly for the CAP conference which was over a month ago! I'm a bad blogger LOL

The conference was really cool and I got the opportunity to meet tons of really awesome people. It was rather unfortunate that my plane was cancelled the day I was supposed to leave because of the weather but I did get home the next day. I've also finished writing another alopecia story for another book, number two now :D (just waiting for it to… Continue

The worst time having AA

I was thinking the other day about when I felt the worse this time round having AA. it's happened at a slower pace than last time so I've been able to experience each stage of hairloss as it's come. I have to say that the worst time for me was when I wore hats to cover the patches but still had long hair. Then I had it cut short and parted differently but it only just covered the patches with loads of hairspray. This was so stressful, one gust of wind and my patches were on show for everyone.… Continue

Can you dye a synthetic wig?? I had someone give me one but its way too light,needs to be 3 or 4 shades darker???

Derm Update - There May Be Life on Mars

I just got home (literally) from visit #3 to my dermatologist. Before I get into the results, I have to say that "wow", what a mind-numbing morning. I think I get WAY too worked up over things. I was really dreading the visit today for fear of going there, then having the derm tell me that there's not really much results. That compounded with the recent small spots I've seen come in would just be a kick to the nads. I was so worked up, my blood pressure reading in the office… Continue