Finally a place to talk about "this"

I love the fact that there is a blog for me on this site. Although I know I may loose interest in it eventually since that's how I am.

Today is not a good day. It is the first bad one I have had in 3 weeks since my last panic attack. Up until that point I was having panic attacks every day for almost a month. I had a slight feeling of panic this morning. I am not sure what brought it on. Then I stupidly looked at my hair in the mirror while still a bit wet and unstyled and went into…

My 4 yr old grand daughter w/alopecia areata wants an American Girl Doll that looks like her. We've contacted the manufacturer who claims it's impossible to make/ ship a doll without hair. I am shocked at the insensitivity, and am only interested in how to help my grand daughter's Christmas wish come true. Any help would be appreciated.

It's been awhile since I've really posted anything about life but today feels like the perfect day to share with all of you. Three and a half years ago I began my journey through night school and weekends to become a Speech Language Pathologist. It's also when I began my journey with my second round of alopecia.

Today I graduate and have found myself I looking back on all of the things I was able to accomplish. It's not easy working full time as a teacher and…

I suffer from AA.
I've had it for almost the past 9 years of my life.
It's been hard, but I've always managed to handle it.
Well, most of the time.
Like with everything in life, me and AA have our ups and downs.

2 years ago, i started going up again. My patches (a total of 4 at the time) were regrowing and slowly disappearing. It got to the point where i was able to stop getting my regular 6-weeks shots and using my cream.

Alopecia is getting exposure up here in the Great White North! (Just had fluffy white snow...it looks beautiful!) Check out the following link to see the Marilyn Dennis Show and our lovely Alopecia model!…

Today Was A Big Day

Today was the day i decided to shave my head. It's also the day my boyfriend broke up with me.. not for that reason, but it still matters, i dont know if my alopecia has anything to do with why he broke up with me or not but its all the same. everything just feels hopeless

I asked the question why me Lord?
This Alopecia has caused me to fall and have no reason to live!!!! My hair is growing and falling out! I have been to several doctors and so many treatments. I'm so tried of people looking at me and having to pay money for hair that sometimes does not look rt! It's not a good feeling at all!!!! I hate the way I look now and finding it hard everyday do look myself in the face or even leave the house!!!!

Bless you alopecia, bless you for being in my life? 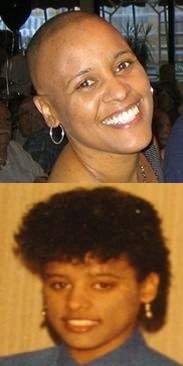 My husband has been working on material for a class on character that he is teaching at a prison. He found himself researching Aleksandr Solzhenitsyn, who spent 8 years in an unfathomable labor camp for writing a derogatory comment about their country's leader in a letter to a friend. Solzhenitsyn later went on to write the classic book - The Gulag Archipelago: 1918-1956 -…

I feel as if I've reached the beginning of a sense of freedom. When I talk of freedom I mean freedom from self, inner relief, freedom from restrictions.

I don't want to get into this sad tragedy of my hair loss at 13. It happened, I struggled, I got bullied, and I went through a long stage of hiding behind wigs and generally hatting myself.

I wanted to say, however, for all those loosing their hair right now, it doesn't have to be that way. When I was 13 growing up in a smaller…

Recently I read a commencement speech given by the late Steve Jobs to the 2005 Stanford University graduating class. In that speech he expounded on how our lives are like dots and as you look back you can connect the dots as to what brought you to the place where you are now. According to Jobs, "You can't connect the dots looking forward; you can only connect them looking backwards. So you have to trust that the dots will somehow connect in your future."

You see, there is complete…

Safety and privacy guidelines for ALL members of Alopecia World

Please note that all suspicious and offensive behavior and other "issues" should be reported using the form located at http://www.alopeciaworld.com/main/index/report

(There is also a permanent and easily accessible link to this report form under the "Members" tab on the navigation menu that appears on every page of Alopecia World.)

Anytime you report an issue, be sure to include details such as supporting evidence of…

Blaming baldness, but what if?

I noticed today a new self- talk pattern that puts in question my self- worth. I have said this inside:"What if retail security followed me because if my mohawk? What if my hairloss did not happen; would she have put me down so often? What if my baldness angered him to rape me?"

I AM VERY HAPPY THAT THERE ARE PEOPLE THAT I CAN IDENTIFY WITH. I HAVE HAD TRACTION ALOPECIA ABOUT 20 YEARS. I REALLY CAN'T REMEMBER WHEN IT STARTED. I HAVE 2 BALD SPOTS ON BOTH SIDES ON THE FRONT OF MY HEAD. I HAVE WORN WIGS,WEAVES,SCARFS AND VARIOUS SPRAYS TO COVER THEM UP. I BECAME VERY DEPRESSED AND DID NOT WANT TO GO OUT MUCH BECAUSE I ALWAYS HAD TO WEAR THE SAME HAIRSTYLE. I COULD NEVER WEAR MY HAIR BACK LIKE I WANTED TO.I ALWAYS HAD TO DO A COMB OVER. MY HUSBAND HAS A HEAD FULL OF…

Hello - I am learning to live with permanent hair loss from a breast cancer treatment drug, taxotere. I started a topic on breastcancer.org and have made friends with women around the world considering treatment with taxotere, or having already been treated with tacotere. Many of us are learning to live this new life of 'no/very little' hair and 'no eyebrows'.

Joining this group is 'my acceptance' of my hair is not coming back. I need to learn the best way to mimic eyebrows and wig…

It's been almost 1 year since my hair started falling out, almost 10 months since I found my first stop and was diagnosed with Alopecia, and 6 months since I had my last shots on the spots. Since then my hair has been thinning but not as bad and its not really that noticeable. All my spots are now growing new hair, some longer than others. I'm just so happy that its coming back, its been a slow process but at least there's progress :) Just wanted to share my exciting progress with yall.

Is anyone else getting spammed on this site? I just got an email saying that some other user read my profile and is "interested" in me and wanted me to send them a picture...I got kinda creeped out. Is anyone else having run-ins with creepy and/or fake users?

Today in church, the speaker discussed kids who have dreams of negative actions on themselves, but who time and again were just found to be having such dreams when faced with a fear or developmental stage they didn't think they could overcome. Being me, of course, I took notes as how this might manifest itself with distraught people on AW. Here is what I came up with as he talked:

What a person really wants to escape is the emotional pain, fear, assumptions or embarrassment associated…

Out in the world as an alopecian; the job interview and further steps

While I am a musician (Singer/Songwriter), I don't exist off the air I breathe. It would be nice. When I was signed to a label in the mid-90s I toured, made very good money. Long story short, my contract with my label was not renewed. It meant "start over". Back to a day job. I burned the candle at both ends, working to support myself, pursuing my musical endeavors, writing performing.

Like millions of other Americans I was laid off in 2008. I work as a temp whenever afforded the…

Female Pattern Baldness- too young for this!

So, it seems like there's this huge stigma with a lot of us who have it... we feel less feminine and I feel like I'm aging prematurely (no wrinkles yet though!). I think that's what really freaks me out about it and makes me feel terrible about myself... when this first started happening to me, I felt like my body was falling apart and there was something wrong with me. I've read a lot of discussions on this site and there were some people with AA angry that more research isn't being done…

Random thought on my journey with alopecia

Most of you know that I am from Canada and rj is American. So when we married we started a whirlwind of immigration processes. I had to file yet another form and get another set of biometric done. One of the steps was another photo session at the immigration office.

I filled out the form and clicked “bald” as my hair color. For a second I wondered if I should have clicked black, since it was an official government form and being AA my black hair does show if I don't shave daily. I…